Here is an article from USA Today (Dated: December 31, 2020) where Twenty states are planning to raise their minimum wage in 2021 which may help struggling workers in an uncertain economy.

With the COVID-19 pandemic raging, layoffs mounting and $2,000 stimulus checks for U.S. households looking highly uncertain, there couldn’t be a better time to bump up the minimum wage for millions of low-paid Americans, worker advocacy groups say.

Employers argue there couldn’t be a worse time, with small businesses struggling to survive amid plunging revenue and a new round of state shutdowns aimed at curtailing the latest coronavirus spike.

So far, workers appear to have won the fight and will reap the benefits starting Friday.

Twenty states and 32 cities and counties – including many in California – are set to raise their minimum wages on or about New Year’s Day, according to a report provided exclusively to USA TODAY by the National Employment Law Project (NELP), a worker advocacy group. About half of those localities will reach the $15 threshold championed by striking fast-food workers and deemed a pipe dream just a few years ago.

Since some will act later in the year, a total 24 states and 50 cities and counties – a record 74 jurisdictions – will boost their pay floors sometime in 2021, NELP figures show. 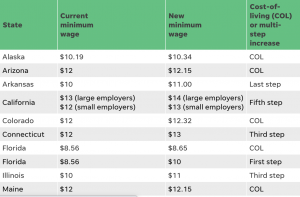 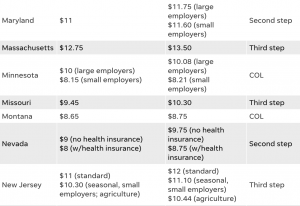 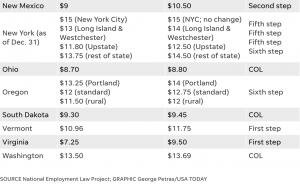 “The fact that we’re still seeing a record number” of states and localities lift their base pay despite vehement opposition from business groups during the health crisis “is a big deal,” says Yannet Lathrop, a researcher and policy analyst at NELP.

Business groups in Maryland and New York, in particular, sought to delay the hikes, but state officials pressed forward.

Meanwhile, the turnabout in views about a $15 wage base has been head-spinning. Even states with relatively low minimums, like Florida and Virginia, are poised for significant increases in 2021 and headed toward $15, or at least the strong possibility of it, by 2026.

By then, 42% of the U.S. workforce will be covered by $15 minimum wage laws, according to the left-leaning Economic Policy Institute

“All workers should be able to make ends meet,” Lathrop says. “They’re not earning enough, especially when they’re exposing themselves to a deadly virus,” as restaurant, grocery store, health care and other front-line workers are doing.

Rocio Espinoza, 44, earns $13.50 an hour as a food preparer and crew trainer at a McDonald’s in Madera, California. After working at the restaurant for 2 ½ years and in the fast-food industry since 2012, “I don’t feel it’s enough,” she said through a translator.

During the pandemic, she says, her schedule has been cut from about 35 hours on average to about 20 hours, putting even more pressure on her finances, even with her husband’s income from his chauffeur job.

“I don’t even feel I have enough for food and gas,” she says.

After California’s minimum wage increases to $14 on Friday, “It will help to have enough gas to get around,” buy more food and allow her to be out sick without worrying about the hit to her monthly budget. It also may help whittle down the $2,000 to $3,000 she owes for medical bills.

Yet employer groups say the impact of a $15 wage will be dire for small businesses battered by the pandemic. Seventeen percent of restaurants, or more than 100,000, have closed permanently or for the long term amid the health outbreak, the National Restaurant Association said early this month.

Even before the crisis, restaurants in cities with aggressive minimum wage increases, like Seattle and San Francisco, were cutting workers or hiring fewer, says Michael Saltsman, managing director of the Employment Policies Institute, which is backed by the restaurant industry.

“If you list the top 100 things you’d do (to help small businesses weather the pandemic), dramatically increasing labor costs is nowhere on that list,” Saltsman says.

Lathrop disputes that higher minimum wages hurt employment. The way to address the financial hardships of small businesses during the crisis “is assistance from the federal government,” she says. “It’s not to keep wages low.”

The $900 billion relief package signed by President Trump this week does include more forgivable small business loans. Saltsman says that’s “just a lifeline to temporarily stop the bleeding” and won’t be enough for many restaurants.

A Congressional Budget Office study last year found a $15 federal minimum wage would increase pay for 17 million workers who earn less than that and possibly another 10 million who earn slightly more. It would cause 1.3 million other workers to lose their jobs, according to the study’s median estimate.

The federal minimum wage has been stuck at $7.25 an hour since 2009, with Senate Republicans repeatedly blocking efforts to increase it. Still, 30 states, with more than 60% of the US workforce, now have pay floors above the federal government’s, according to NELP.

Low-income workers are on the verge of benefiting from bigger paychecks. On Friday, about half the 20 states and 32 localities boosting their minimum wages will enact large increases as part of significant hikes being phased in over several years following legislation or ballot initiatives.

That’s not chump change. A $2-per-hour increase adds up to about $4,000 a year for a full-time employee.

There will also be small, annual cost-of-living increases in about 10 states and a couple dozen localities. For example, base hourly pay will edge up from $12 to $12.32 in Colorado, and from $13.50 to $13.69 in Washington State.

Make sure your voice gets heard.

To receive notifications of new posts, enter your name and email here.